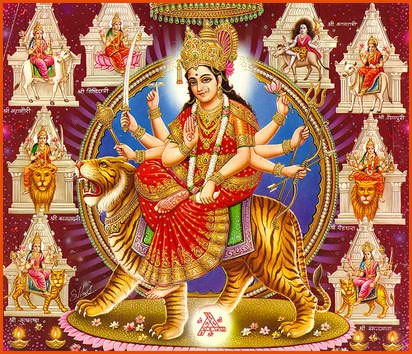 Each of these three deities gave rise to three more forms and hence in all, these nine forms together are known as Nav-Durga.

1. Durga Shailputri (Daughter of Mountain): Shailputri is the first among nine Durgas, therefore,1st night of Nav-Durga is devoted to the worship of Her.

“Shail” means mountains, “Putri” means daughter. Parvati, the daughter of the King of the Mountains Himavan, is called ‘Shailputri”. Her two hands display a trident and a lotus. Her mount is a bull.

2. Durga Brahmacharini The second Durga Shakti is Brahmacharini, therefore, 2nd night of Nav-Durga is devoted to the worship of her.
Her one hand holds a “Kumbha” or water pot, and the other holds a rosary of Rudraksh beads (Her most adored ornaments). She personifies love and loyalty. Brahmacharini is the store house of knowledge and wisdom.

3. Durga Chandraghanta: The name of third Shakti is Chandraghanta. She is worshipped on the 3rd night of Nav-Durga.
She is beautiful and bright. She possesses ten hands and three eyes. Eight of Her hands display weapons while the remaining two are respectively in the mudras of gestures of boon giving and stopping harm. There is a half-circular moon on her forehead. She rides a lion. She is mainly worshipped in Tamil Nadu, India.

4. Durga Kushmanda: She is the 4th Shakti of Durga; therefore, the 4th night begins the worship of her.
She possessed eight arms, holding a weapons and a mala (rosary). She rides on the lion and She emanates a solar like aura. Kushmanda represents the knowledge of cosmic intricacies in the human race.

5. Durga Skandamata: The Fifth Shakti of Durga is Skandamata. She is worshipped on 5th night of Nav-Durga
Using a lion as Her favorite vehicle, She holds Her son Skanda ( leader of gods) in Her lap. She has three eyes and four hands; two hands holds lotuses while the other two hand display defending and granting mudras, respectively.
Skandamata is an ocean of knowledge.

6. Durga Kaatyayani: Kaatyayani is the 6th Shakti of Durga and worshipped on 6th night of Nav-Durga.
She has golden colored complexion with four hands and three eyes. One left hand holds a weapon and the other a lotus, while the other two are in the mudras of “blessings” and “protecting.” Her vehicle is lion.

7. Durga Kalratri: Kaalratri is the 7th Shakti of Durga and worshipped on 7th night of Nav-Durga. Kalratri means scourer of darkness; enemy of darkness.

She had black or blue skin, beautiful long hair, three eyes and four hands, two clutching a cleaver and a torch, while the remaining two are in the mudras of “giving” and “protecting.” Her vehicle is faithful donkey.
Kalratri is the destroyer of darkness and ignorance.

8. Durga Maha Gauri: Maha Gauri is of eight years old and she is worshiped on 8th night of Nav-Durga.
She has four arms and three eyes with the fairest complexion of all the Durga Shaktis. Therefore, she is known as “Maha Gauri.” She is often dressed in a white or green sari. She holds a drum and a trident. She rides on bull.
Mahagauri radiates peace and compassion.

9. Durga Siddhidatri: Siddhidatri is the 9th Shakti of Durga. She is worshiped on 9th night of Nav-Durga.
She has four hands and looks pleased. Ensconced upon a lotus, She is the grantor of 26 different wishes to Her devotees. This form of Durga is worshiped by all Gods, Rishis-Munis, Siddhas, Yogis, Sadhaka and devotees for attaining the best religious asset.

These popular nine different forms of Durga are worshiped over the nine days. It signifies the nine glorious aspects of the Divine Mother.

All together the Divine Feminine Energy represents protection, love, prosperity and knowledge. Therefore Nav-Durga is the special time to worship, sing her glories and pray to her for good health, prosperity, purity of mind, love, peace and Anandam/bliss “Sat Chit Ananda.” It is said that since lot of people pray during that time, the collective energy becomes very powerful and prayers are often heard.

May Mother Goddess shower Her blessings of health, happiness, peace and prosperity upon everyone in the universe at this glorious time.