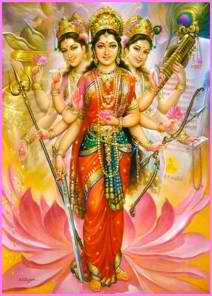 “What is Navratri (Nav-Durga)?
Your questions on the 9- days of Goddess are answered here.”

Q. What is Navratri (Nav Durga)?

Navratri (Nav Durga) is a nine days festival of hindus to honor the Mother Goddess. This celebration occurs twice a year: First one is in the spring, during March/April and the second one is in the fall, during September/October based on the lunar cycle. Navratri is not just a time to celebrate and of joy but is to attain Everlasting happiness, Peace and Anandam (Bliss) through self-discipline, self-control, and sacrifice. It is 9 Days of Living in Mother Goddess Consciousness and Experiencing Her Grace, Love.

Q. How do people celebrate the festival?

Different types of pujas and ceremonies are performed by different communities on each of the nine days. Many people (Hindus) observe fasting; eating only fruits, vegetables and dairy products. They do specific sadhana, prayers, practice celibacy and visit temples. Many temples,, as well as people in their homes, offer special prayer programs with singing and music throughout the night, called “Jagran”. On the final day, young girls up to age nine are worshipped as goddesses and given gifts as an offering of gratitude to mother goddess for her blessings. It is believed that at that age the girls have pure energy like mother goddess. In some parts of India, the idol of the Goddess Durga is immersed in the holy rivers on the 10th day (Dashehra).

Q. What is significance of Navratri (Nav Durga)?

The festival signifies the nine glorious aspects of the Divine Mother and is celebrated for nine days, not only in India but in many parts of the world. Mother Goddess is also called Shakti, the energy of God. She is the energy of the Trinity, as the creative aspect of Lord Brahma, sustaining aspect of Lord Vishnu and destructive aspect of Lord Shiva are all encompassed within Her. The Divine Trinity of Goddesses Durga, Lakshmi and Saraswati together represent feminine energy that provides protection, love, prosperity and knowledge to all their devotees. Goddess Durga is known to remove evil, misery and pain from our lives. Goddess Lakshmi is the Goddess of Wealth and Goddess Saraswati is also known as the Goddess of Knowledge. Nav Durga is therefore a special time to worship and sing the glories of the Goddesses, and pray for good health, prosperity, purity of mind, love, peace and Anandam/bliss. As large numbers of people pray during this time, the collective energy becomes very powerful and it is said that the prayers offered are often heard by the Goddesses.

Q. Who is Durga Maa?

“Durga Maa is the embodiment of Pure Love, Pure Energy (Divine Shakti) and Light within (Jyoti)” Durga Maa, the Supreme Goddess, is the embodiment of Pure Love, Courage (Shakti), Light within and Bliss. She represents the power of the Supreme Being that preserves moral order and righteousness in the creation. The Sanskrit word Durga means fort or a place that is protected and thus difficult to reach. Durga, also called Divine Shakti, protects mankind from evil and misery by destroying evil forces such as selfishness, jealousy, prejudice, hatred, anger, and ego. She is referred to as Universal Mother and the mother of Ganesh. Sometimes she is also referred to as Parvati, Lakshmi, and Saraswati because she is also an incarnation of Saraswati or Lakshmi. She is also known as Maha-mayi (Great, Terrific) because she is a composite goddess of different elements of many Gods and Goddesses. Durga Maa is depicted as a warrior woman with eight hands carrying weapons of almost all the Devas, assuming mudras, or symbolic hand gestures, and riding a lion or a tiger. A tiger symbolizes unlimited power. Durga riding a tiger indicates that She possesses unlimited power and uses it to protect virtue and destroy evil. She is usually shown wearing a red sari. The color red symbolizes action and the red clothes signify that She is always busy destroying evil and protecting mankind from pain and suffering caused by evil forces. Thus, Goddess Durga symbolized the Divine forces (Positive Energy) that is used against the negative forces of evil and wickedness. She represents pure energy (Positive), known as divine light or “Jyoti” is the embodiment of feminine and creative energy. (Divine Shakti)

Q. How Did Durga Maa Come Into Existence?

Durga Maa was created by Lord Vishnu as a warrior Goddess to protect good people (devas) from bad people (demons). According to legend, since only a woman could kill the demon, the Lord bestowed energy upon Uma/Parvati, the wife of Shiva, transforming her into the Goddess Durga. She was given blessings by the lord in the form of weapons and emblems (mudras) in order to protect.

Q. Does Navratri (Nav Durga) have any spiritual significance?

Self-Purification (eradication of the negative tendencies of our minds and hearts): During the first three days, the Goddess Mother is worshiped in her powerful, destructive and terrifying form of Kali/Durga. People pray to Mother, asking Her to use Her destructive power to destroy all imperfections and faults and purify them enough to become a receptacle of her divine energy.

Self-Transformation: After Self-Purification, the next three days of Navaratri are devoted to worshipping the Goddess in Her prosperity-bestowing form as Mahalakshmi. Goddess Mahalakshmi does not merely bestow material prosperity, but also grants qualities which a sincere spiritual seeker requires, namely, calmness, peace, equanimity, compassion, and love. By worshipping and praying to Her, one starts developing positive attributes and experiences inner prosperity, peace and happiness.

Self-Knowledge: During the last three days, Goddess Saraswati is worshiped as the bestower of the true light of knowledge, wisdom and understanding. Once one is purified by Goddess Durga (vices being annihilated), transformed by Goddess Mahalakshmi by receiving the spiritual wealth of inner peace, calmness, compassion and love, then the devotee is ready to receive the true light of understanding. By worshipping and praying to Goddess Saraswati, the devotee is now blessed with true wisdom (Self-Knowledge).

Navratri, therefore should not be just a time to celebrate Goddess Durga’s victory over the demons but should be the time to pray to Goddess Durga to remove our vices, such as anger, selfish desires, greed, ego and undue attachments. We must pray to her to destroy our inner enemies/vices.

Only then can we attain Self-purification, Self-transformation and Self-Knowledge — Everlasting happiness, Peace and Anandam, “Sat Chit Ananda.”

From, The Path to Anandam Team